This lens has long been the standard fitted on every moderately priced SLR until the cheap zooms came in the picture in the 1980's. I'm not sure this is a boon for the amateur who doesn't need many focal length in a very compact set. While zooms are the best answer to this specific need, they loose in many other respects. The design of a 10x zoom weighting around 400 grams and cheaper than 300 € assume some compromise. Modern ones with aspheric and high refraction index lenses can display very good sharpness throughout the focal range but they are usually not as good on distortion and vignetting. More troublesome is their aperture restrained at about 5.6 at 50 mm. This makes them a second choice for portrait, where shallow depth of field is necessary to isolate a subject from a distracting or ugly background or make nice bokeh (out of focus blur) effects. And at f/5.6, the lens let pass through less than a tenth the light it would do at f/1.8. A brute fact that shouldn't be overlooked. Where 640 ISO would do with a normal prime, you'd need to pump the settings up to 6400 with the zoom, a level where many sensors show a huge amount of digital noise.
The 50mm AIS is essentially the same as the current AF model. Same internal layout, weight about 130 grams and around 100 € used. As a AIS, it commands a manual focus. On an entry-level DSLR like the 3100, it hasn't got the light metering. Some tries and errors or an independant light meter may be useful. The AF model hasn't this limitation.
Now, has it got defects that spoil these nice features ?
At 1.8, at the center, the smallest details are still distinct but not well detached from the background, due to the lack of general contrast. On the edge, the names printed on the map, while readable, seem to be covered by a slight haze. The ability to render small details is here, but subtle shades may be lost, especially in the edges or corners. At 2.8, contrast makes a leap ahead, with a better rendering of shades, and the yellowish haze has vanished. One stop further makes it better and at 5.6 the lens is at its peak, showing sharpness and contrast across the frame. The colored artifacts in the small letters make me think it exceeds the resolution of the sensor.
How to use it at best ?
Obviously, the 50 1.8 is not a its best at full aperture or f/2 where it displays a pretty low contrast. It's not the ideal setting to shoot at maps or other very detailed flat objects. In such case, and if light is low, try to stick to f/2.8 and slow down the shutter or add some ISO. Full aperture won't be much of a concern though for portraits where most of the frame is out of focus and the main subject near the center. In this case, where shallow depth of field is key, you can try first to get near the subject, at f/2.8. A shorter distance will be more effective to reduce depth of field than a larger aperture. Scenes in low light conditions require extra caution with f/1.8. Bright lights against a dark background show a visible halo pointing outwards the image, the infamous coma. This optical defect, common to most fast lenses devoid of aspheric element, is strongly reduced from 2.8 and onwards. If you can't avoid f/1.8, well that's life. Don't expect to make huge prints out of it. I guess an A5 would be fair enough though.
I hope this test will help people use this lens at its best and avoid the rare pitfalls. Every lens has its own lot of defects and those without optical ones are usually heavy and horribly expensive. This one is lightweight, very cheap and gives from 2.8 outstanding images, on par with the micro-Nikkor 60 2.8 AF. 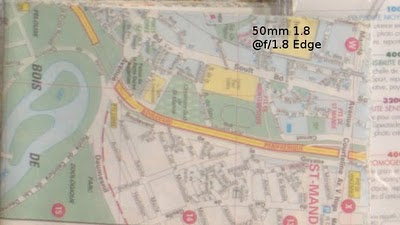 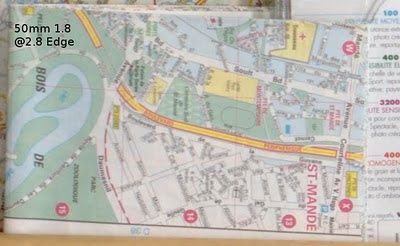 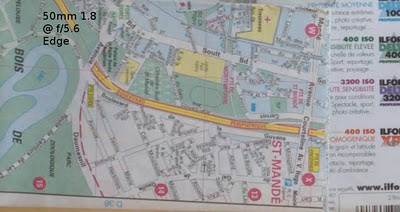