Whether it's the need to be reassured on one's own choice or the mere curiosity about what makes a good lens, reviews about SLR lenses flourish on the web and seem to draw much interest and endless debates. The problem with these reviews is the lack of a universal yardstick that could be understood by anybody without a degree in applied physics. I'm not really fond of these links to a 15 pages PDF file where MTF, lpmm, LW/PH are supposed to be fully explained. In the analog era, when 24×36 TMax or TP 2415 were the standard for high definition films, the problem was somewhat simpler. But with the advent of digital sensors it's an other story. How can you compare a lens tested on a D3 with an other mounted on a D3x with 12 M more pixels ? Or a DX (APS-C) versus a FX (nikon parlance for Full-Frame format) ? Well you may, if you read that bloody PDF.
An other option is to sieve bits of truth in the fierce debates between those who advocate the Nikkor 50mm 1.2 AIS as a stunningly sharp lens and others who say they prefer use a blur filter than shelling out 300 € for a used special effect lens.
My choice is the third option : taking pictures in a very similar situation and look at minute details. Some call it the pixel peeper way. In French, it's fly fucking.
Anyway, my attempt here will appeal to your subjectivity, and to your good sense. The match is between Nikon primes, amongst which the 24mm f2.8 AF, 35mm f2 AIS, 50mm f1.8 AIS or micro-Nikkor 60 f2.8 AF. With each of them I shot a still life with fine details and the same (or about) magnification. This means that a given subject should have the same size on the sensor whatever the focal length is. The result is judged with the naked eye, on 100% crops. The objects are put in line on a shelf, their respective distance to the camera may vary by a centimeter and light may change. The camera, a Nikon D3100 shooting RAW at 100 ISO, didn't.
Despite my lack of scientific ambition, I have to admit the setup of such a confrontation is quite tricky. Even with a heavy tripod the perfect focus was hard to achieve. Many attempts were needed, it took days, hence the slight changes of subject and light.

I started with the 60 mm. At full aperture, the tiny characters on the center (DX sensor) are quite readable. On the edge (not the corners), the small letters are not so. At 5.6, the center is even better and the edge just slightly behind.

The film pack is situated somewhere in between the very center and the edge. Click to enlarge and see by yourself. 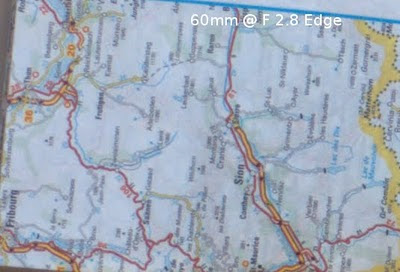 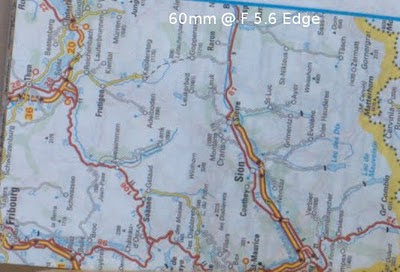 This kind of lens designed for close-up photos or reproduction of flat subjects are supposed to render details and contrasts with high fidelity. Well it seems to be true on the edges provided you stop down the aperture to 5.6 and below.